I spent the first eleven years of my life in England. For anyone who hasn’t been to England in wintertime, it is cold. Snow, ice, frost, low dark skies. It all lends itself wonderfully to Christmas (for some reason, because I would imagine that Jesus was born somewhere warm). Christmas was a magical thing for me as a child, mostly because there were lots of sparkly, shiny things, we got presents and ate magically festive food. It was also a time when my parents – who were usually quite frugal given the tough economic times – would buy my brother and I gifts. These would mostly be placed in a stocking – not one of those red and green Santa Claus ones you get now, but one half of one of my mum’s pantyhose. I’m still not sure why but every year there would be a satsuma (or mandarin for my Australian readers) right at the end of he stocking. Some years we would visit cousins and aunts and uncles, which was always chaotic and fun. I was the youngest in the family so the collected aunts, grandparents and older cousins all doted on me. There was also something to do with Christianity which mostly involved kisses from older members of our Christadelphian church and of course the Christmas story, For an Autie, having the same carols, nativity story, food and the obligatory school play was very comforting. Little girl me thought that Christmas was a pretty good thing.

My parents – especially my mum – were far more focussed on the religious aspect of Christmas than the food, gifts and sparkly things. My brother and I were told from as long ago as I remember that when we turned 16, there would be no more Christmas gifts. And my parents kept to their word as far as I recall.

As I grew older I liked Christmas less and less. In fact I spent Christmas in1994, 1996, 1997, 1998 and 1999 in prison, which was pretty awful (although far worse for fellow inmates who had kids waiting for them on the outside). By the time I started to change my life for the better, I had very little affection or warmth towards that particular day on 25 December. I thought the traditions were pointless, the decorations tacky and you really wouldn’t have wanted to get me started on Carols by Candlelight! (‘has been non-celebrities, awful singing etc).  I didn’t feel desperately close to my family and Christmas seemed to make me extra sensitive to their perceived put-downs and rudeness.

A few years on, we had a new addition to the family – a wife to my brother, my sister-in-law. This diminutive but forthright addition to our little clan loved Christmas. I distinctly remember thinking ‘oh crap! I’m going to upset her by being a combination of Ebenezer Scrooge and the Grinch who stole Christmas.’ I suspect I wasn’t the only one. My mum is a complete aescetic in a lot of ways. Material goods have very little impact on her happiness. For years our only Christmas presents to one another had been charity gifts (you know the sort of things – goats for people in developing countries and so forth). With the arrival of my sister in law and her family into our lives, and quite soon afterwards three small Purkises, our Christmas culture had changed. Oh how this Autie hates change!

However, this Autie, as well as hating change, is thoughtful and considerate – or at least tries to be. I didn’t want to be the person who was miserable at Christmas, who ‘accidentally’ told her nieces and nephews that Santa Claus was fictitious (and inspired by Coca Cola advertisers apparently). Change – while unpleasant and challenging – is also a part of life and I was very happy about the inclusion of the new members of my family. I realised that I had to turn my ‘bah humbug!’ into a ‘goodwill to all!’. This necessitated a change to who I was and how I thought. That sounds a bit tricky, but some years previously I had gone from begin a criminal, homeless, negative, druggie person to a university student then author and then public servant. So surely changing how I felt about Christmas should be easy. And actually, it was. Last year I decided that I would not entertain negative and paranoid thoughts about family members. If in doubt, I could talk to my nieces and nephew who love their Aunty. I would keep in mind all the positive aspects of Christmas. I never quite managed to watch carols by candlelight, but when strangers wished me ‘Merry Christmas’ in shops, I would smile and reciprocate the greeting. And in fact, I discovered many positives: sparkly things, tinsel and baubles are awesome, seeing kids’ opening their gifts and being amazed and excited is awesome, family are great. Just think of how difficult Christmas must be for people who don’t have a family or a relationship with family members. And I really love carols and the Christmas story.

Yep. There will be no more bah humbug from me, but a very merry Autie Christmas to all who celebrate it, happy Festivus to those who don’t and all the best for the new year for al the good people of the world. Thanks for reading, sharing, commenting and liking my blog these last few months. I look forward to hearing from you in the new year. : 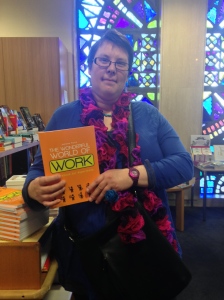 Ok, so not Santa Claus but happy author pic, just cause, well, it’s my blog and I think that scarf is pretty festive 🙂