My dad had a farm throughout my childhood and teenage years. When I was a young child I didn’t really get much pocket money. I got something much better – wages and business income. Now this might sound like my parents were horrible people sending their daughter out to work in the fields but it wasn’t like that at all. When I was small my dad told me that I could make some pocket money by growing a crop of tomatoes, so he showed my brother and I all the skills required to grow tomatoes. In fact I suspect most of the growing was done by my dad, but when it came harvest time, I discovered that my crop had yielded 17 pounds – a fortune to a six year old. As I grew older, if I wanted money I would do some easy but necessary tasks around the farm and through doing this learned the value of work – reward for effort. This is a lesson that I think is valuable for all children: if you want to have something, you put in some effort, be it chores or farm tasks or whatever. It is a great skills for life, especially for kids on the Autism spectrum as it can build self-worth and independence. When my brother and I were teenagers I remembered my dad telling me that any boss would be glad to have both of us given our strong work ethic. At a young age I knew the value of a hard day’s work.

When I moved out of home I got a job in a fast food restaurant and was soon promoted to junior manager. It never occurred to me to go through life without a job. I enjoyed work – it felt good and I for paid. Sadly the next few years of my life were devoid of profitable activity. A new manager came to our restaurant and started to sexually harass me. It wasn’t just offensive comments either – he would touch me and I was genuinely concerned for my safety. Being an Aspie and a young Aspie at that, I had no concept that there might be such a thing as workplace rights or that my manager was in the wrong, so I quit my job and claimed student welfare benefits, known at the time as Austudy. Thus began a dire chapter in the story of my working life. I was outside of the labour force for many years. I subsisted on welfare payments and lived a shady life with criminals and drug addicts, none of whom worked. However, I made an attitudinal change when I was 25. I decided that I wanted an ‘ordinary’ life: a professional job, an education and a mortgage. I had no idea how to do this but started by enrolling in a university course.

About halfway through my first year at university I decided I needed a job. A friend worked in a restaurant and recommended me as a dishwasher. So I began doing two shifts of work a week. It was unlike when I had worked as a child and a teenager though, for in the past I had been confident in my skills and quite commanding at work. Now I was terrified of making a mistake, It was like I was a brain surgeon and any tiny slip would result in death (rather than a dirty fork being returned by a patron, as it would actually have done). I grew absurdly anxious and the day before each shift was torture. I was so anxious I thought I would pee my pants on the tram on the way to work. Of course this thought only added to my anxiety. As had happened to me in the past, anxiety turned into psychosis and I had to quit my job.

I wondered if I would ever be able to work, but my good old determination kicked in. A year or two after my unfortunate dishwashing experience I started a volunteer job. I was far less worried as the gallery I volunteered at weren’t paying me so I didn’t feel quite as responsible. I took a number of employment stepping stones – from a small business editing video, to writing a book and becoming an author to working as an Autism consultant and then I was ready. I applied for my ‘ordinary’ professional job and soon afterwards was moving to Canberra as a graduate public servant. I was anxious about starting a new job I didn’t know how to do in a city where I did not know one person, but the change from impoverished public housing tenant to well-paid public servant was so dramatically positive it eclipsed the anxiety. I soon realised that I was a natural public servant. I loved all the hierarchy and order. I loved that I was part of something bigger – the Australian Government – and I loved that people in shops called me ‘ma’am’ and tried to sell me things rather than look down their noses at me.

The whole time I have worked as a public servant I have had a second ‘career’ gong on: that of an Autism advocate. I wrote my first book in 2005 and had a few interviews in the media and got asked to speak at a couple of things. It wasn’t a lot of work. I probably gave two lectures a year. This all changed in late 2013 when I gave a presentation on Autism and resilience for TEDx Canberra and had my manuscript of a book on employment for teens on the spectrum accepted for publication. I think what happened may not quite have been a meteoric rise to fame but I did start to find that people at conferences knew who I was and I occasionally got waylaid on the bus by people in the Autism world. The main thing that changed was my workload, and yes, as the title of this post suggests, I work around 80 hours each week, including Autism advocacy and paid work.  I don;t mind a bit.  Things have come full circle and I”m like my younger self wanting to please my dad and earn extra pocket money. I pride myself in my work. I don’t think of most of it at work anyway, more as interesting and diverting activities which I sometimes get paid for. Once again I am a confident and accomplished employee. Since joining the public service I have always said I feel like I died and went to work heaven, and I think I must be in advocate heaven too.

Work is an excellent thing. Humans are programmed to work. Being unemployed can be soul destroying. If you can work – even if it is volunteer work or just a couple of hours a week – do it. You don;t know where it will lead you.

Here is a link to my book ‘The Wonderful World of Work: A Workbook for Asperteens’  (activity book about work to start preparing teens on the spectrum to join the workforce. It;s good, I promise): http://www.jkp.com/uk/the-wonderful-world-of-work.html 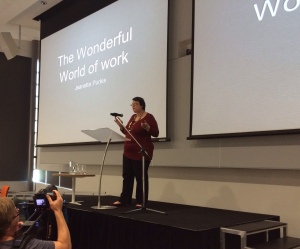 Me, talking about work