On Tuesday I attended a showcase for Cooperative Research Centres which was held at the Great Hall of Parliament House. I am on the reference group for the Autism Cooperative Research Centre. The vent at Parliament involved an awards dinner. I spent a lot of the evening talking to various politicians and notable people. It was certainly a privilege to be included in such an event. I felt very special to be invited to such a thing.  I noticed the attitude of the wait staff during dinner. They had obviously been told to be invisible. Every time my wine glass was empty they popped up behind me with a wine bottle (and don’t worry, I declined a fair few times – i had work the next day and didn’t fancy doing it with a hangover). I made a point of thanking the wait staff when they presented me with a plate of food or a cup of coffee. I felt that there was a power relationship going on which I didn’t particularly like. I was apparently one of the important people and the wait staff were inconsequential and only there to serve and keep out of the way.

I reflected on the unlikely situation I was in to be invited to such an event. For I have not always been ‘important’. I was once alienated, disenfranchised and powerless. In the 1990s I probably wouldn’t have been allowed in Parliament House even to do the guided tour and yet here I am now in the same room as the Prime Minister and his Parliamentary colleagues. Twenty years ago I was a drug-using, slightly crazy, recent ex-prisoner. Following that, I spent many years living in crisis accommodation and begin unemployed. It took my a number of years to move past that negative time in my life and became who I am now, but these experiences are as much a part of me as writing books and giving presentations and working in a professional job.

I don’t like the concept of ‘important’ people. We are no more or less important than anyone else. In fact I like to think that we are all important. We all have a role to play. Each one of us is valued and  loved in someone’s eyes, be they a partner or child, a close friend or a cat. If we set up one person to be important due to their achievements that can leave others feeling inferior or unworthy. Yet we are all worthy of love, affection, respect, value and dignity. I find that as a slightly well known person in the Autism world, people sometimes defer to me and talk up my value. But who is to say I am  of more value than a mum of three kids on the spectrum who may not have written books or spoken at TEDx but who is doing a great job of helping her kids grow into happy, independent adults? This also raises the issue of what makes someone important or notable. I do public speaking and write books. These are apparently activities which cause others to respect me. But why is public speaking of more worth or note than raising kids? I think positive parenting is extremely important. Public speaking gives one something of a public profile but it is only one useful thing that people can do to assist Autistic people to achieve their full potential.

So I got to have dinner at Parliament House and meet politicians and I have Autism organisations telling my parents what an honour it is to have me speaking at their event and yes, it is easy to get carried away and think how important I am. However it is not helpful to do so. I need to remind myself that all humans are essentially equal and we have different paths in life. I am no more important than the person with a severe mental illness whose greatest achievement is to get out of bed each morning and keep going. I am no more important than the alcoholic doing her best to keep her kids out of trouble.  I am no important than any other human being. The value of life is not measured in achievements or in how much influence you have. We are all important, every single one of us. We all have something to give the world. 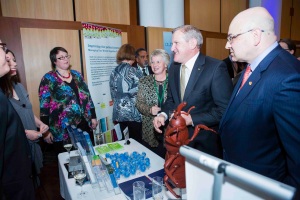 Me at Parliament with the Industry Minister

One thought on “We are all ‘important’”