You may wonder why my blog title is ‘AWEgust Day 1’. The reason for this is that I’m undertaking a challenge to raise money to train more mentors for the I CAN Network. I will be writing a blog post every day between now and the 31 August. So far nobody has parted with any money on my behalf. I’m thinking I may need to donate $100 myself, just to show willing! Here is the link:

I have been wanting to write a blog about isolation and loneliness for a while. A lot of people on the Autism spectrum experience loneliness and social isolation. We may struggle to make connections with others or to find a partner. This is not just for older people. In fact many young people on the spectrum are extremely isolated and have few people in their life. For me, I was OK for human contact when I lived at home. I had my parents and my brother and I went to school and saw a bunch of other teens. There were enough humans in my life. In fact I wanted more solitary time. All this changed when I moved out of home. I had a very small number of friends – a couple who I idolised, an older friend who was quite similar to me in many respects (and actually works at my workplace now, some 23 years later – I saw him the other day and said hi). Apart from my housemate, they were my only friends. The housemate got together with a boyfriend and essentially moved out of my house. I was alone in a three bedroom house with nobody to talk to. As I only had three friends I would spend most of my time in the big empty house, waiting for the phone to ring, The friends I idolised were actually not very pleasant people and I think they probably saw me as a little needy and pathetic so I saw them less and less often. My loneliness was almost palpable – I felt physically detached from the human race.

I ended up moving into another house where there were more people – dysfunctional, drug-smoking people but humans nonetheless. Interestingly I was less concerned about the actual individuals I sent time with and the quality of the interaction. Instead I was happy just to have other humans around. As I grew older I met many, many people and lived in all sorts of different living situations. One thing i felt I could never do was live alone. However I was impoverished and had no control over my living arrangements. Despite not wanting to live alone, I found myself in a big flat in Melbourne all by myself. I would talk to a couple of people on the phone a lot. I liked to occupy myself as I found this staved off loneliness. I remember having a party and inviting all my friends and there were five of us.

When I moved to Canberra in 2007 for work I was worried about not knowing any people in Canberra. At first I spent most of my social time with my housemate and soon after got to know some people from my new church and the local Autism organisation, Up until the past couple of years I haven’t had a lot of friends and the ones I have have not always been my first choice in humans to spend time with – more friends through default rather than choice. Now I have a wide circle of friends  – most of them are people I know through Autism advocacy so we have some common interests. For the first time in my life I have a good balance between social time with people I value and enjoy their company and solitary time,

Thoughts on social isolation and connectedness 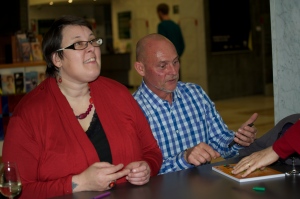 My illustrator friend Andrew and I signing some books…