Yesterday I awoke at 5 am. I didn’t need to but I was going to the airport and didn’t want to miss my taxi (at, um 8:20!). I was travelling to Dapto, a town on the Pacific South Coast of New South Wales. I was a bit stressed. I wasn’t really stressed about the talk – i wrote it ages ago and practiced it a few times so that was all good to go. My concern was arriving at the venue on time. I had to take a taxi then a plane to Sydney then a taxi to Wolli Creek Station then a country train which – it all went right – would have me arriving 14 minutes before my talk. What could go wrong? I then returned home via a similar process after the talk. My Kitty was at home waiting for my return and the Coming of the Cat Food. My medication was also at home. I had thought about taking it with me, just in case there was a delay but I decided against it. Every single mode of transport did what I wanted it too. I was lucky enough to get three very courteous taxi drivers with whom I had three interesting conversations. On the way home I got a train form Wolli Creek station to the airport which I ad never done before but a friendly station staff member told me how. The only glitch was that the flight home was delayed by half an hour and involved lots of changing gates and things. Of course I arrived home stressed and jangly and went to bed about twenty minutes after I arrived.

When I agreed to do this talk and decided to make it a one day event I knew what it would entail in terms of transport logistics. My mental health has been rather difficult of late, with scary hallucinations and people whispering about me all the time which I’m fairly certain isn’t real. I have not slept properly for a long time and have been very stressed and overwhelmed. So a day like yesterday was not something I would consider helpful for these issues.

There were no dignitaries at the talk, no Cabinet Ministers, famous authors, nobody who could provide me with material or intangible gain of any sort. It was a meeting of people with disability, carers and service provides in a regional area. So why on earth did I do this? What was the benefit to me?  And why did I come away form the presentation feeling fantastic and not really caring about all the transport-related stress?

The reason for this goes to something fundamental to all of us – my motivation. I have been thinking about my motivation  lately. My motivation has changed over the years. I used to want negative and unpleasant things to happen to me so motivation was entirely negative – not a very nice time in life. After that I spent some years wanting to be ‘ordinary’. I was aspirational and wanted an education, a professional job and a mortgage. The fact that I achieved all of this within eight years or making the decision and within in years of being released from prison  is testament that I am quite motivated. Somewhere in that journey I decided I wanted to be an author and after that an advocate and public speaker around Autism. I wasn’t really sure why I wanted that but it involved a big profile and lots of people knowing who I was. I don’t think it was a particularly altruistic motivation. I wanted to be well known. These days I tell people that if you want fame and recognition go on the X Factor and if you want to help people be an advocate. I could have done with that advice myself a few years ago. Of course I became somewhat well known in the Autism community and realised that I am no longer motivated with reaching a huge audience, I have been on national television, given a TEDx talk, sold bunch of books and written for websites and journals which reach millions of people. I tend to think I am too well known these days so  I am not seeking to further build my profile.

I think now my motivation now is to make a difference to people’s lives, whether that be thousands of people or one person. Yesterday I gave out a bunch of business cards and all the people I gave them to were ordinary folks who wanted to talk to me about their own challenges and struggles. Yes I like talking to dignitaries and Cabinet Ministers but the more ‘real’ and satisfying conversations are with people with genuine need (although of course sometimes dignitaries have real need too).

I’m glad my motivation has moved into a more positive place.  So I spent yesterday in a state of mild anxiety, checking train timetables on my phone and checking when the last plane would leave in case I missed mine. Despite this I had an amazing time talking to people about my experiences of education to work transitions. Any hey, if it involves me getting up on stage it has to be good! I also bought some Louis Comfort Tiffany fridge magnets froth Metropolitan Museum of Art shop at Sydney airport so I have a souvenir.  I am very happy about where my motivation is at now. It is certainly a god exercise the pinpoint your motivation and what drives you. 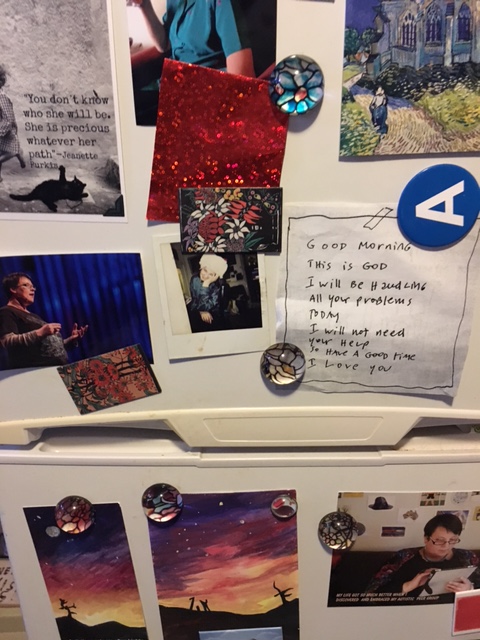