The other day at work I saw an email from my workplace’s Pride Network – which I am note-taker for. The survey was about coming out at work for those who identify as one or more of the letters in the ‘LGBTQIA+’ acronym. I have identified as part of the sexuality bit of that acronym – for asexuality – and as part of the Q bit too – for being gender non-binary / gender Queer. I spent many years identifying as lesbian and had some relationships with women before realising that I have little to no interest in relationships and no interest at all in sex. Because asexual and gender Queer were never presented as options when I was growing up I went through life not knowing where I fit. The sense of liberation and empowerment at finding another ‘tribe’ in addition – or more accurately alongside – my autism was amazing. The odd thing about the survey at work was that I felt I didn’t belong. I shouldn’t assert eh questions or tick the boxes. They weren’t me, even though I know they ARE me. Some complicated emotions and allegiances for this little Jeanette and  imagined a great many others. Gender identity and sexuality have so much bound up in them beyond what they actually are in essence.

I always feel I need to justify my gender identity – ‘but I used to have a shaved head and wear flannelette check shirts and Blundstone boots’. Or ‘People always get my gender mixed up.’ or ‘I only wear feminine things because I like flower patterns and colourful jewellery. I don’t wear heels and I only wear makeup if I”m talking to an audience of over 100 people!’  Gender is something  people have an opinion  on and a lot of he time it is an unhelpful opinion. The reason I even now feel the need to justify my own identity is those opinions from others, not all of which were intentionally disrespectful, despite how they came across and impacted my sense of who I am.

In my understanding gender is how you feel when you think about yourself. What other people think is irrelevant and nobody should ever have to justify their own identity. For me, my gender is ‘Jeanette’. I don’t feel ‘boy’ or ‘girl’. In fact I can’t really say what those things would feel like. The self-consciousness strikes all the time. Why are my pronouns ‘she’ and ‘hers’? I actually don’t know. To me, my identity doesn’t need a change in how others refer to me, at least not at this point in time.

And there is that again, that ‘time’. I think a fair number of us are changing all the time in terms of gender identity and sexuality. We are coming out of a historical period where sexuality and gender have been quite strictly proscribed through social ‘norms’ and rules, and let’s face it, through a fair amount or prejudice and violence too. Even now when things seem to be improving, there are those persistent legacy attitudes threatening to deny people the right to be themselves and express themselves in the way they are.

Throughout my life kids have questioned my gender identity. Often a sort of bullying challenge is ‘what are you? Are you a boy or a girl??’ This used to really get to me and I felt powerless but angry. Why dd it matter if I was a boy or a girl? I am a person not a specific gender type. It still happens now and I say ‘neither. I’m Jeanette’ and smile at them.  Inwardly I’m still feeling attacked ad scared but I am also representing in my own little way,

As a teenager gender and sexuality were very strictly enforced, mostly by the ‘gender police’ of the bullies and often through unspoken norms and judgements from adults. I never went to a school dance. That’s not the worst deprivation of course but the reasons behind me not even considering going to such s event was around the twin weapons of homophobia and bigotry around gender. I pretended to be heterosexual for years, even to the extent of turning one of my male friends into my ex-partner to fool a housemate who was sexist and homophobic. As an autistic person I struggled to lie but I feared for my safety if I told the truth. This horrifies me in hindsight and terrifies me that these attitudes of hatred and violence still continue.

A huge number of Autistic people also identify as part of the LGBTQIA+. There is emerging evidence which strongly supports the knowledge that a significantly increased percentage of non-heterosexual, non-binary gender identities among autistic people as compared with neurotypical people.

I think identity – whatever part of your experience it relates to – is such a strong thing. As autistics and as members of other identities can have a very strong self-identity, supported by like-minded people and genuine allies. Or we can have our identity squashed out of us through ignorance and bigotry or just the application of incorrect assumptions which we are too hurt by or frightened of to challenge. For me the various facets of my identity which I have gathered to me over many difficult years are a precious thing. I would really like a world where people could express and live openly and proudly in their own identity.

And in answer to the questions in the title, I am neither a boy nor a girl but I am a Jeanette, and an autistic and non-binary and asexual one at that and I have a mental illness and I identify with women  and feminism as I have been on the receiving end of misogyny and abuse and I have seen others be attacked by this as well ad have it. My identity changes and grows as I travel through life. I am so glad after many years of keeping things secret – even from myself at times – that I get to be my own unique me. That is my wish for everyone else too. 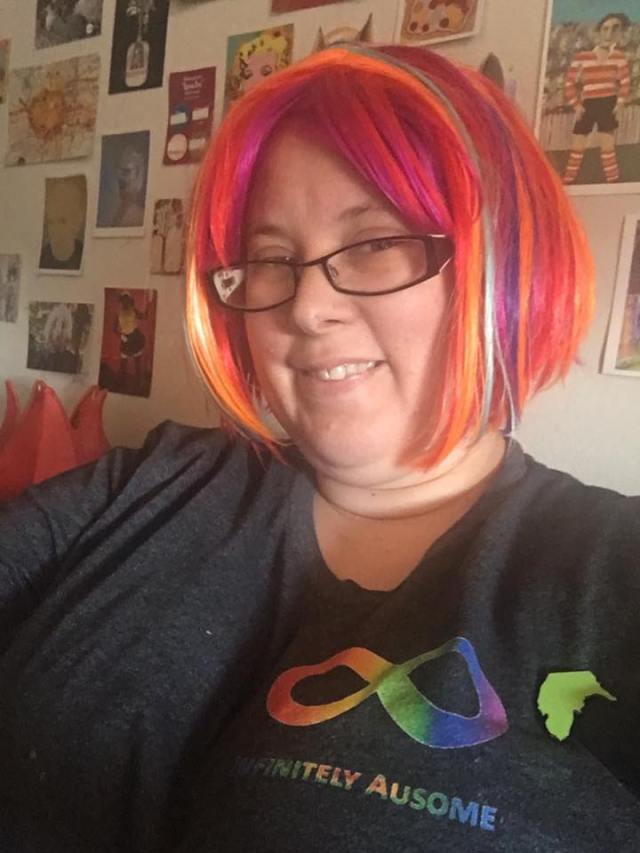 2 thoughts on “‘Are you a boy or a girl?’ Identity in the face of bigotry”