Today as I went to work, walking in the crisp, cold, sunny Canberra morning to the bus stop, I stopped for a moment and said to myself ‘I am free’. That may seem an odd sentiment for such a confirmed overachiever and positive thinker as myself but it was a very genuine and welcome realisation. I was referring to both a philosophical and spiritual freedom but also to a physical one.

For much of the time between 1994 and 1999 I was a prisoner in the most real sense. I made poor choices, I was confused and angry and very unwell. I hated myself and I didn’t like the world any better. I actively sought out  negative things. I was pretty much the antithesis of my current self. There were reasons which drove me to this but I will always own my actions. For while criminality is a social issue, people also have a choice in what they do and I repeatedly made the worst possible choices with no regard or respect for anyone.

Sometimes my online ‘family’ talk about my early adult years as if they were somehow romantic. Someone even noticed that my prisoner number had the same digits in a similar order to the Les Miserables character Jean ValJean, as if criminal Jeanette was a heroic figure, singled out for oppression. I think that assessment of me in the 1990s is completely wrong. While I was definitely a victim of many oppressions and abuses, I was no more romantic or heroic than any other person in such circumstances. I was aggressive and self-destructive and didn’t offer anything very useful to the world.

When I finally did muster some determination and motivation to change who I was, the first thing I did was very intentionally distance myself from my – at the time very recent – shameful past. If I saw any of my former friends who had addiction issues or had been prisoners I would do everything to avoid reconnecting, terrified that I would slip back into my old ways. On one occasion I unexpectedly met a woman I knew from prison and she asked to borrow $20. She said she would pay me back and asked for my phone number so she could contact me when she had the money. I deliberately gave her an incorrect number. Despite being very poor I figured $20 was a small price to pay for staying on the ‘straight and narrow.’

Six years after I left prison I had got myself a Masters degree and a published book plus a lot more positivity and confidence. However despite that I was constantly plagued by the thought that something would happen to put me back in the space that I was in the 1990s. This fear stayed with me for a very long time. Even into my thirties as a professional employee and autism advocate with a growing profile and people saying positive things about my character, I always believed that something would happen which would turn me into my previous self and everything I worked for would be gone. Just like that.

I have been punishing, blaming and doubting myself over and over for almost twenty years. In the past twelve months I have started to chip away at this vision of myself as an unethical and unpredictable person. Last night I did what I think may be my final act in reconciling me now to all the previous people that were also me. I made a playlist on Spotify. OK that probably doesn’t sound all that important but this was a playlist of songs I had actively avoided for almost twenty years. The title of the playlist doesn’t suggest anything momentous – ‘90s alternative.’

When I was a prisoner I spent a lot of my time in the ‘management’ unit for making poor choices even within the confines of prison. This meant I was alone for a lot of the time. Prisoners get paid a very small wage (in my case $4 per day) for doing work – usually process-type tasks. In fact I was highly diligent at this, much to the amusement of the other women. I guess I was always meant to be a workaholic! I saved my wages and was able to buy a radio and cassette player. I am fairly certain this small thing actually saved my sanity. I had that great and most liberating of gifts: music. I would record the songs from the radio and ended up with 12 cassette tapes of my favourite songs. I remembered which songs were on each tape and if I didn’t want to listen to music the talking on the radio kept me company. I knew every single song on the charts in  the late 1990s and for the past 19 years I have avoided listening to them if I could at all help it, terrified the evocative nature of music would send me right back to 1998 – as that broken version of me in that lonely little cell!  Last night I realised something big. I finally worked out that in that dark time the music was my liberation and as such, listening to it now – as much as then – was a positive and empowering thing. The songs from the late 1990s were not going to remind me of my incarceration but of the strength I must have had even then to eventually get away from that awful existence. Last night I spent what turned out to be a very short space of time searching for all the songs I loved back then and putting them in a playlist together. I listened to them last night and then again today as I worked in my professional job. It was a weird experience in many respects. Many of the songs I actually had not heard at all in 20 years so when they came on I remember the last thing I was experiencing when I was listening to that song. It wasn’t necessarily easy but it was liberating.

The liberation element comes from this notion: I was listening to a song I hadn’t heard since 1999 at work while working on a project plan. I was at the same time prisoner Jeanette and present day Jeanette, and that was actually OK. I accepted for the first time that they are both me. I think I can forgive my previous self for the harm they did. I could invite my past self into my current world without any real fear that I would become that person again. It is a pretty fertile place for self-reflection and emotion and I’m feeling bit raw and frazzled but in a good way. Despite trying to do so for almost twenty years I guess I never needed to negate or destroy prisoner Jeanette.

I have a theory that if someone doesn’t want to do or become something then they don’t – why would they? They don’t want to after all. I did not properly apply this to myself until yesterday. So yes I am free. It is a new world. 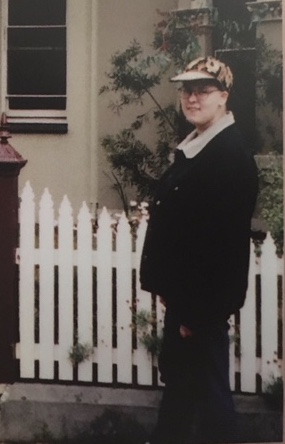