I am sitting in Whimsy Manor with the heater on and a cup of tea next to me, typing this blog. I am listening to myself interviewing Positively Autistic advocate Sarah Scrimshaw in a prerecorded interview on my radio show. It’s an odd experience and it brings home to me the idea of how i – and my various social roles are perceived and how I perceive myself. The reason I’m thinking about social roles and perceptions is that I am speaking at a social role workshop for a disability advocacy organisation called Imagine More later this month. An example of some of my social roles would be author, public servant, cat lady, public speaker, Aunty etc.

Our social roles are essentially a way for others to perceive us in relation to themselves and wider society. People with disability and those from various disadvantaged groups can be pigeon-holed into stereotyped roles or have negative perceptions applied before they even open their mouths.  Our social roles can impact on our employment prospects,relationships and on how those in authority treat us. A lot of people have noted that they are treated differently by shop owners when they are wearing their business attire and when they are in tracksuit pants and a T-shirt. Shopkeepers may see the person in business clothes as being in the social role of ‘wealthy’ and therefore worthy of a little attention in order to convince them to spend money. The same person in tracksuit pants may be viewed in a different social role – that of unemployed person perhaps, as that is the role their attire denotes.

I find the idea of social roles as applied to myself quite interesting, This is because I have occupied vastly different social roles in my life. As a child I occupied the role ‘problem child’, ‘class clown’, ‘weird’, ‘gifted’ and many others. There were not a lot of positive expectations or responses to me. Even without any formal diagnosis and the stereotypes that can come with that, I was often seen as deficient and broken.  By the time I graduated to adulthood I was a small, isolated and desperately unhappy person. I actively sought out the negative roles, the dark places. My social roles were variously ‘criminal,’ ‘drug addict’, ‘homeless person’, ‘person with mental illness’, ‘alienated person’. These roles became a self-fulfilling prophecy. I incorporated them and the expectations that came with them, into my persona and sense of identity. This was a dangerous situation. I could very easily have been permanently inducted into these extremely negative roles and never have escaped. I imagine a forty year-old criminal me, using her intellect to control criminal activities and survive in a dog-eat-dog world. This iteration of Jeanette is a hopeless person, someone who is far removed from everyday society, someone who has no hope of a productive or happy life. A broken woman. But I never became her.

People who see me now do not see my former self. People see the entire package of all these positive roles. The history beneath this is almost never evident. I made a choice in 2000 to be ‘ordinary’. Ordinary to me meant that I would join society. I would have a professional job, a mortgage, an education and a suit. Within eight years I had all this although when I announced my intent to gain an ordinary life most of the people I knew greeted the news with disbelief and even derision.

The other thing about roles which enabled me to move from negative to positive was that I mostly ignored other people’s opinions. When you try to change your life, it appears that everyone has an opinion. I tried very hard to ignore all the doubting the blaming, the focussing on the past. I was determined to make my own way. I often used people’s negative expectations ‘you can’t be a public servant. That job isn’t autism friendly’ etc) to propel me towards positive things. I was determined to prove people wrong who doubted me. So I used the social roles which were problematic as a means to springboard off into a positive world.

So our social roles can determine how others see us and how we see ourselves. But they are far from set in stone and can be changed as many elements of our character and persona can be. For Autistic folks, social roles and our perceptions of them can have a huge impact on how we see ourselves in relation to the world s be careful about ascribing or reinforcing a social role for someone on the spectrum and remember that you can break from from social roles, 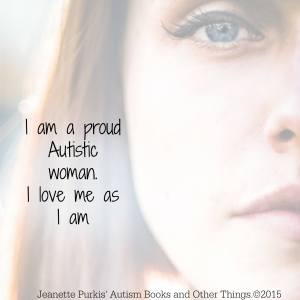