This week I had an exciting time at the tax accountant. No really, I did. I found out that I have finally paid off my student loan. This is quite an achievement as it was a rather large student loan, gathered over eight years of study of varying degrees.of diligence and success. I thought the end of my student debt probably signals the need for a study-themed blog post, so here it is.

When I was a young Jeanette, my parents always encouraged academic success. Neither of my parents had gone to university, which in their day was a far more esoteric sort of thing than when I was a teen and almost every professional job required a university qualification. In fact my mum’s radiography qualification was completed in a trade school environment rather than a university but now the equivalent course is a four year degree course, I guess my parents wanted the best for my brother and I in terms of our career opportunities, as most parents do. We were never told by my parents what we should study or even that we had to study at all, but it was a sort of unspoken given that when we finished school there should be some further education.

I left school at seventeen, but I did graduate with a year 12 certificate Both my brother and I were top of our respective years. I got a letter of congratulation from the local MP which I promptly threw out (I was a socialist and the MP a conservative). I didn’t get into uni the first year i applied because I applied for Fine Art courses where the admissions officer was more interested in your folio and knowledge of art than your Year 12 score. I spent a year working and painting, reapplied and was accepted the second attempt.

On the first day of uni I was terrified of all the students. I was certain they were ‘real’ artists and could see me for the dilettante that I surely must be. I saw the room full of students and thought I would never make any friends from their number. This turned out not to be the case and I mad a few friends but I was always intimidated by the talent of others. I didn’t finish the course. Instead I got involved with all sorts of scary people and took five years off the life I probably should have had and lay in the gutter, metaphorically, not looking up at the stars but into the drug dealer’s squalid lounge room.

The first thing I decided to do when I did find those allegorical stars and want a better life for myself, was to reenrol in my Fine Art course, I didn’t know how I would go at uni but I thought it was something I needed to do. I had left my course unfinished in 1994 and I hate to leave things unfinished. So in 2001 I started uni once more, this time as a mature aged student. I was less scared of my classmates than I had been the last time around but I was very anxious that they would find out my drug and criminal history so invented a few years of my life (very tricky for an honest Aspie like me). The second time I was in first year uni  – for I could not get credit for my previous study given the time that had elapsed –  I was struck by how much higher my marks were and by how my fellow students thought me something of a star. One older woman asked me in all seriousness ‘Are you a genius, Jeanette?’ I wasn’t quite sure what to say.

Uni wasn’t all joy though. I was quite unwell with mental illness for most of first and second year, having to use a special consideration at the end of first year. I was terrified of my drawing class, despite the fact that I was considered the best student in the year. It went for five hours and involved intense concentration. It was also dark by the end of the class and I have always hated going home in the dark. By the end of the class I was always frazzled, overloaded and paranoid.I was so determined to do well at the class that I sacrificed my well-being and comfort. I was top of the year and won a prize for the class but it almost brought me undone. Of course no-one else could see this and just saw this intense, very private person concentrating on her drawing like there was no tomorrow.

I went on through uni, a high achiever the whole time, even if the trade off was my sense of well-being and mental health. I was asked to do honours and then got accepted into Masters. The later years of university were less of a time of mental illness and more one of enjoying the course but also being in signifiant poverty, living in public housing and subsisting on Government benefits. Most students in my Fine Art course were from wealthy backgrounds. This makes sense because the poorer students tended to enrol in courses like nursing or teaching where there is usually a job at the end of the degree. For Fine Art graduates the career landscape has just a few options. You can do a graduate diploma in education and be an art teacher, you can do something completely unrelated to art (as I did when I joined the public service) or you can be an artist and often live a finically precarious life working odd jobs and selling the occasional painting or sculpture, Being poor was hard. I often went without food in order to afford a new tube of paint (Fine Art is a very expensive course for materials). Luckily I had a motherly neighbour with an endless supply of leftovers. 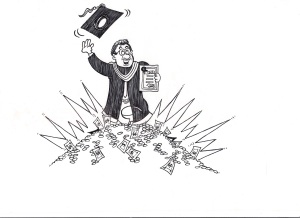